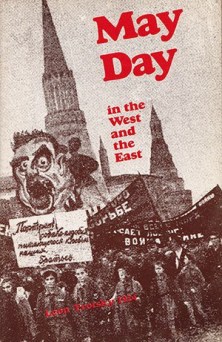 In this centenary year of the Russian Revolution, the single greatest progressive event in human history, we recognise the global class faces great dangers but we are also confident that great opportunities will arise for those who continue to fight for that programme of world revolution. The crisis unleashed by subprime mortgages and the Lehman brothers collapse of 2008 still reverberates in the global economy. This unresolved crisis of debt and falling rates of profits, endemic to the capitalist mode of production itself, as Marx analysed, has engendered the rise of national chauvinism and economic protectionism.

The volt face of Donald Trump over Syria after the false flag Sarin gas attack on 4 April with the launching of 59 Tomahawk Cruise missiles on 7 April and the bellicose threats to the Democratic People’s Republic of Korea makes the world a very dangerous place now.

For almost a quarter of the century since the dissolution of the USSR and sixteen years since the beginning of the “war on terror”, US imperialism has been trying to reassert and update its hegemony on the planet and offset its economic decline by relying on its military force.

The invasions of Iraq and Afghanistan together with the attacks against Libya, Syria and Ukraine (which many on the Left shamefully endorsed, presenting them as ‘revolutions’), the Brazilian coup in 2016 and the ongoing attempted coup in Venezuela are part of the same imperialist offensive.

We affirm that neither Russia nor China are imperialist powers in the Marxist sense. The central enemy of all humanity is the warmongering global hegemonic power, the USA, its allied imperialisms in the EU and Japan and their great finance houses and transnational corporation plundering the planet guarded by the US and NATO war machines, many times larger than the combined military strength of China and Russia.

Macrista adjustment rests on unemployment, as a weapon to defeat the workers with the passive complicity of the trade union bureaucracy. However, the rank and file workers of the unions forced the bureaucracy call a general strike with 90% workers’ support. The possibility is that the struggles of the workers will be victorious by winning the independence of their own organizations from both capitalist state, and the trade union bureaucracy, who must be driven out.

Workers begin to react to the attacks of the government installed after the coup d’état of 2016, gradually resume their great struggles, launching a general strike on 28 April after almost three decades of inertia, bureaucratization and disorganization established the PT’s policy of collaboration with the bourgeoisie. The class struggle finds itself at a crossroads. On the one hand, the bourgeoisie stimulates its right wing to consolidate a coup within the coup and to establish a judicial-military dictatorship in the country capable of exponentially increasing the slavery of the working class, annulling and their labor,  social security, and free health and public education historical rights. On the other hand, the only way to defeat this reactionary wave is the united front against the coup regime, and simultaneously, in the heat of the struggle against the right, to defeat the opportunist and sectarian leadership within the mass organizations, to complete the struggle of the workers and their revolutionary vanguard.

The huge, militant demonstrations of 2010-2012 and the massive wave of radicalization belong to the past. The defeat on the streets combined with the bankruptcy of the parliamentary road and the full capitulation of SYRIZA to the diktats of the Greek bourgeoisie, the EU and the IMF has left the biggest part of the proletariat demoralized and in the search of individual solutions, especially in the absence of a credible working class political alternative. The bourgeoisie escalates the assault against workers’ rights, tearing apart what remains of the ‘welfare state’ and making clear that the era of the social contract and of a certain arrangement between classes is gone for good. Without underestimating the battles that need to be fought or abstaining from them, the vanguard and the movement need to understand that the time of social protest and class struggle within the acceptable bounds of the previous period is over. The SYRIZA experience provides further proof that there is no way forward but the intransigent struggle against the bourgeoisie and its state.

The Brexit vote in Britain was part of this process as a right populist wing of the ruling class sought to deflect the anger of the working class and oppressed away from the capitalist system itself and onto other workers, immigrants to begin with to promote xenophobic nationalism. Jeremy Corbyn, the “far-left” leader of the British Labour party have succumbed to anti-immigrant chauvinism dressed up as anti-EU imperialism.

The UK’s jobless rate is just 4.7%, the lowest since 1975, but zero-hours contracts increased by 101,000 in the last quarter of 2016 to 905,000 compared with the previous year. This super-exploited sector has seen a series of strikes and court action to challenge this and the agency system which enforces it. Delivery drivers, couriers and cinema workers have conducted a series of strikes for a living wage and union recognition. Workers at Picturehouse cimemas have struck work many times since 2014 over union recognition and its refusal to pay the London Living Wage to its staff. The strikes in five Picturehouse cinemas in March were the biggest strike action ever by cinema workers in the UK.

The UK’s General Election is on 8 June and workers have no choice but to cast a class vote for the Labour party but be prepared to follow the example of the Picturehouse cinemas.

What might be a classist analysis of the USA’s imperialistic agenda nowadays? Obama’s eight-year legacy as the empire’s commander in chief became consolidated abroad as ultra-interventionist through the implementation of policies that varied from parliamentary coups in regions such as Brazil, Argentina, and Egypt to terrorizing drone military wars in most parts of the Middle East.

Domestically, the working-class vanguard recognizes him by his constant assault on minorities by creating a police state that killed many young black lives and escalated the deportation of Latino and Muslim immigrants to numbers never seen before. His fake demagogy of “hope” unveiled his true imperialism agenda: to deepened America’s working class exploitation, but most importantly to escalate terrorism in the Middle East and destabilize the BRICS by pushing for the implementation of a new cold war.

In the midst of these developments, Trump was elected with the support of sections of the working class who are white and much poorer since the running down of manufacturing industry. Promising to get rid of “criminal” immigrants who were as described by Trump as, “stealing America from Americans,” he camouflaged the crisis of capital by putting the blame on immigrants and pitting sections of the working class against one another.

However, contrary to his promise of greater job opportunities, as immigration laws are getting much tighter and as larger number of deportations commence, these job promises together with his promise to reenergize the industrial base is far from becoming reality. As the working class struggles across the country, big corporations are free to pile on longer working hours and low wages, and unions are becoming less evident in some sectors of society.

As Trump’s days as president progress, the empire and its establishment put pressure on him from all sides by using the “Russian electoral support” tactic and his now questionable “loyalty to America” to push him not only into assuming the tasks begun by Obama but to escalate them. Examples of these developments are evident in his recent attack against Syria, sending 59 Tomahawk cruise missiles against Syrians; dropping the largest ever non-nuclear bomb in Afghanistan, killing civilians, including children. Trump is aware of his imperialistic duty and is assuring his commitment to the establishment’s agenda by reenergizing the Cold War that could turn “hot” at any point now.

In the first round of French presidential elections the “neither right nor left” candidate Emmanuel Macron will contest the runoff vote with the Front national leader Marine Le Pen on May 7. Macron benefited from massive support from financial capital and the mainstream medias, and from all parts of the apparatus of the Socialist Party and the CFDT union, from all those who have imposed the shameful Labor Act. Macron will initiate all the so-called ‘reforms’ for the benefit of the MEDEF, the employers’ federation. But like Renzi in Italy, Macron would soon be faced by the French working-class movement who have not forgotten the great class fight against the Labor law of the past year. Knowing well that fascism cannot be stopped through the ballot, we support mobilizations against the lumpen elements and physical force and their utterly reactionary agenda. We do not support either candidate in this election and recommend a spoilt ballot.

As it was seen just a few weeks ago, that thirteen Maruti Suzuki workers were given life imprisonment by the Indian bourgeois judiciary for demanding equal rights and justice. Farmers’ suicides in different parts of India continue in great numbers which threaten the future of Indian agriculture. The corporatization of the education system along with the rise of caste and religion-based discrimination in India projects the manifestation of injustice due to imperialism, the highest stage of capitalism. The anarchy inherent in the capitalist mode of production is the cause of this gross injustice. The Indian fascist state is employing its “security” forces to guard moribund capitalism against all those who raise the hue and cry for the rights of the people of Kashmir and Manipur for self-determination; it is using barbaric methods in the name of “law and order” (bourgeois prejudices!) against all those who are raising the hue and cry for an exploitation-free society. Most of the laws with which the country is governed today are laws that were introduced by the British imperialists many years ago for the purpose of furthering their own colonial interests. Therefore, the same exploitative system is continuing till now with the same centre-periphery relationship (result of massive colonial hangover!). That is why, today, when we look at the increasing rate of misery of the Indian working class, we feel as if we are re-living the colonial times!

Although the working class is at a low level of combativity internationally now nevertheless they are fighting back in important struggles and it is impossible to imagine that they will nor rise to meet this challenge provided that the vanguard of the class-conscious proletariat provides them with a revolutionary political alternative and takes responsibility for its implementation.